The camp area emptied out somewhat, fairly early in the morning.

We walked around and had a look at the vacated places, but then decided to stay where we were, rather than go to all the hassle of packing up the camp and relocating, for only one or two nights more.

Went for a drive out along the Camooweal road, to try to find the canoe trip access points to the river, shown on the General Store brochure. Wanted to see what the river was like at these points, and also if there were camp spots there – we would be coming back this way after our visit to the Lawn Hill area, and might find somewhere great to prop for a little while.

We found an access point about 18kms out, marked by two drums beside the road. It was a bit tricky to get into – the track was eroded, then sandy, but it led to a beautiful, huge, area for camping – on firm ground, not river stones. The river was beautiful here,too, some rapids, with pools above and below. There were a number of drums for rubbish about, so obviously it was regularly used. It would be a great spot for tents. John said he would not be keen on trying to get the van in there.

Another track, this one about 12kms out, was marked by one roadside drum. It led to a large area of river stones that were deep and not compacted, like the ones where we are camped are. There was a Coromal van there, on about the only patch of ground that was viable to tow on. The river was narrower there – a pool, with no rapids.

Reflections in a deeper pool

On the way back, we bought fuel at the hotel – $1.69cpl! Also bought a pack of steak at the Store – John’s choice.

Had a late lunch back at the van. By now it was hot.

Went for a swim in the afternoon, as we had seen others doing. I walked upstream along the bank to a place where there was a divided channel and a narrow “race” around a bend. I went in there, where there was a very strong current, like a spa. I got bumped a bit by stones in the race, and then the current wanted to seep me under a clump of pandanus. I caught a branch of this to keep me out in the open, and got some splinters! 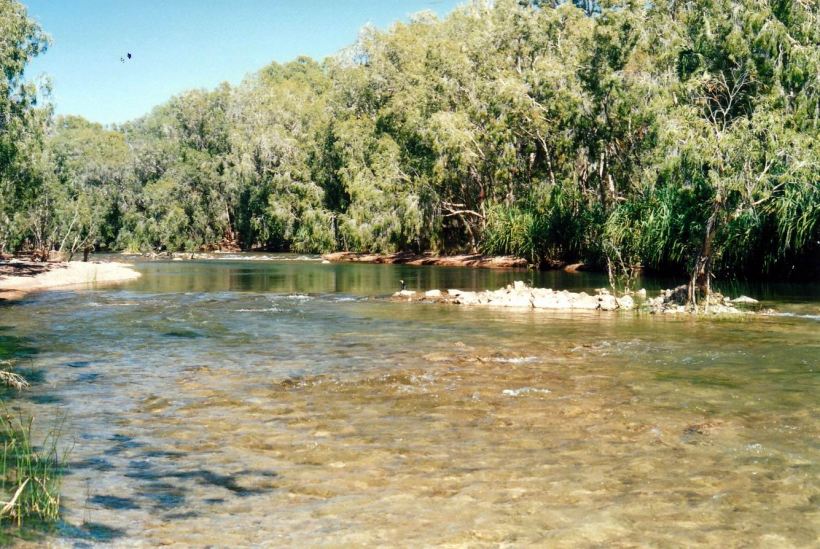 Rapids in the river

I advised John not to do the race section, but to enter the river below it, into calmer water. The current carried us down to our camp, fairly quickly. It was hard to stop there and just sit in the water, due to the current. The river looked deceptively lazy but the current was definite.

We went back and did the float down again, from the calmer section. Then sat in the water for a while. It was clean, clear and cool, and a lovely way to spend the afternoon.

A motor home came in. The couple looked about. John encouraged them to park near us – they seemed desirable neighbours and would create a buffer from those maybe less so.

As the afternoon wore on, it became cool quite quickly, and suddenly too cold to be lazing around in wet bathers.

John lit a little campfire and cooked potatoes in foil, then the steak and some zucchini halves on his mesh grill. He also cooked some eggs and made himself a steak sandwich, with bread. I found the scotch fillet, though tender, to be very bland – not as tasty as southern steak. Different cattle breeds, obviously. The meat was not good value, having cost us $8.

This morning, mother kite pushed Baby Huey out of the nest. Tough love! He hopped/flew to a nearby branch, then took off and flew! It must have felt pretty good. He was not good at landing, though, tending to miss the branch he was aiming for and crash down to a lower one. The parent birds hovered about him – literally! He had several more flying sessions during the day. We were so lucky to have been here at just the right time to see this.

So now what do I do?

Sat by the remnants of our fire for a short while, after tea, but then it was an early night.