The day was still sunny, but with a chill wind that made it feel quite cold. This was to the extent that we sat inside the van to eat breakfast – most unusual for us, because we like to sit looking out at whatever view we have.

Drove to the Ranger’s base, to pay for our extra day.

We were greeted by a most unexpected sight – a moving sail in the distance, on the flat, arid, stony country! Closer up, it was a little sail powered go-cart type of thing, being ridden by his wife, with dog racing alongside. It seemed to speed along on the firm, stony, surface, but would not be much good in sand. Out here, I guess, the residents have to find ways to amuse themselves. From the Rangers base, there was not even much in the way of interesting walking – given the nature of the occasional floods of the river, the base was away from any timbered channels. 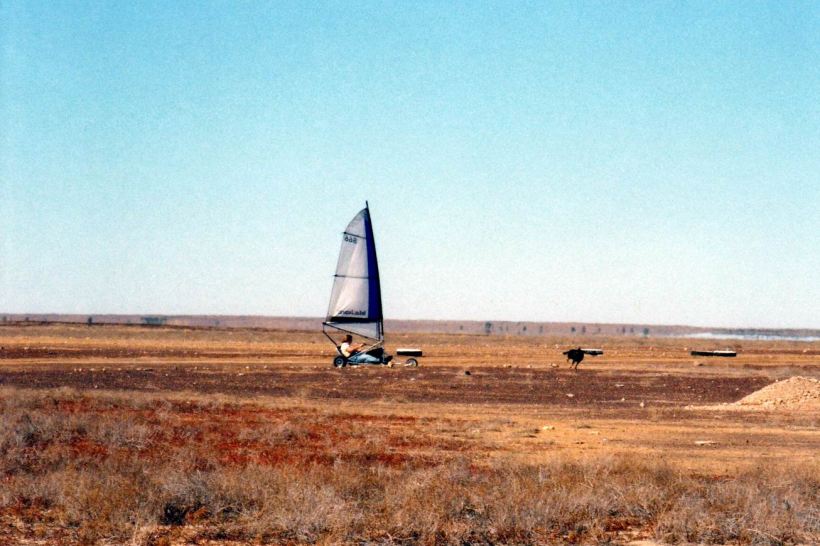 Speed machine. The apparent water in distance was a mirage

The Ranger was very friendly, and showed John over his great solar panel set up, with its huge array of panels. $200,000 worth, he told us. The solar set up ran all the house electricals. There was a very large bank of batteries, too. This set up would – eventually – save money on diesel to fuel generators, and get round the hassle of transporting large quantities of same, out here. He said it was all remotely monitored and controlled from Perth! 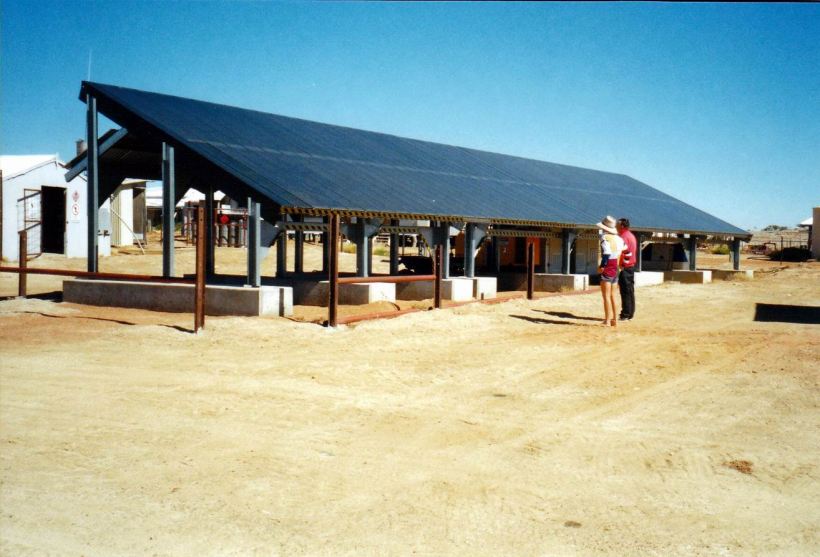 This park was so off the tourist trail! There were twelve entries, to date, in the Visitors Book, for 2002.

I asked about the ruins we saw on the circuit drive – Ingledoon? He told us that these were originally thought to have been police barracks, but now they were believed to be from the original settler in the area, as they had found some ladies’ artifacts. It seemed someone needed to do more research on the place.

They definitely need a feral car eradication or, at least, reduction, program!

From Ranger headquarters, we drove a short way along the road to Winton, then turned west to go to Janet’s Leap Lookout. This took us onto an escarpment on the other side of the Diamantina Gates from where we had walked yesterday.

The track to Janet’s Leap

I wondered about the origin of the Janet’s Leap Lookout name and later found that it was a relatively modern one. When Janet Holmes a’Court sold the Diamantina Lakes property some local remarked that she might as well leap off the cliff there as sell it to the National Parks, for all the good it would do. I for one, am very pleased she did sell it this way, and people like us can get to visit the place.

Apart from showing us the river from that angle, it also showed a totally unexpected expanse of dissected hills and valleys to the east – sort of tableland country. It would be spectacular for photography.

To us, that area to the east looked like the opal mining country we’d seen around Quilpie and Winton – guess it is really not that far from Winton. Had we seen that before talking with the Ranger, I’d have asked if there had been historic opal mining over in that part of the Park.

From the Lookout, we could clearly see the Diamantina Gates, and extra waterholes along the river channels.

Channel and waterhole from Lookout

We’d seen photos at the Ranger Base, taken in the floods of January 1999. The waters were all around the low rise that the Ranger’s house is on, and way out across the flat plains. He said that some of the channels had been filled to more than 6 metres deep. Their airstrip would have been well under water. I’d tried to imagine what it must feel like, isolated out here, with even that means of access to the outside world cut off.

From the Leap Lookout, could see the river channels spreading out over the flat plains

Back to camp, where we packed up as much as we could.

The other couple were back. They’d checked out Gumhole, as a more sheltered alternative camp, but decided they preferred Hunters Gorge. 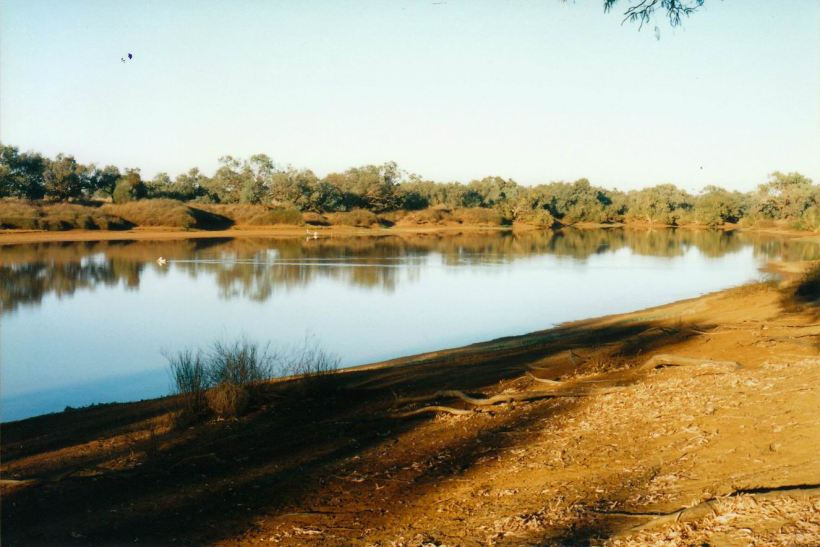 From our camp, in the late afternoon, the other end of the waterhole

We had a last, final, sit round our campfire, watching the sunset and then the stars.

There was an owl in the tree over my head. I hadn’t seen it, but earlier the honeyeaters had been making a fuss around the tree, and I’d wondered why. I only saw it after dark, when it suddenly flew off – and frightened me!

Tea was mushroom soup from a tin, corn cobs and left over fish cakes.

After we went in the van, John plugged the laptop into the inverter and had a little computer time.