Packing up and getting going took a while, because we had not done any of this yesterday.

We left Aspley about 10am.

From the Caravan park, I navigated north a short way and on to Telegraph Road. This took us east and onto the Gateway Motorway. Followed this south, over the Brisbane River, then took the Ipswich Motorway west. Whilst this looked the long way round on the map, it was so much easier than the way I’d brought us in on. In the much lighter Sunday traffic it was a really easy run.

We stopped at a BP servo in the Ipswich area, where John topped up the fuel with 30 litres – at 84cpl – enough to see us to Dalby, where he knew there was really cheap fuel.

Just before we started the climb up the Toowoomba Range, we pulled off the road and John engaged low range gears. He kept in the low range selection up the Range. I had been a bit worried about towing back up the Range – its 10% gradient seemed to steep when we’d come down it – but trusty Truck churned steadily up the gradients to the top. I was relieved to come to the edge of Toowoomba at the edge of the Range.

Then, we had to navigate our way through Toowoomba. There was no easy route because we had to cross right across the town. Again, we were glad it was Sunday.

We hadn’t really had a plan for where we would stay tonight – had decided to see how we felt. As we came to Chinchilla, decided to overnight there. Could have pushed on to Miles or even Roma, but it had been quite a demanding drive, for much of the way, so we both felt it was time to stop.

We only needed the minimal set up, as we were able to stay hitched up. 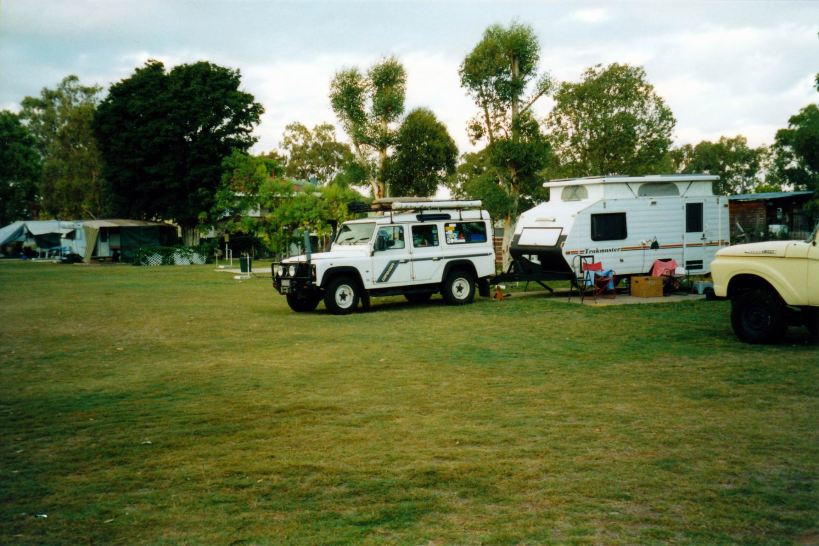 Still hitched up at Chinchilla

John had a nap. I sat outside the van and read.

Early night – we were both really tired! I am pleased to be heading “bush” again. Cities are stressful places!