We slept in somewhat. It was too chilly to get up early!

Spent the bulk of the day browsing around White Cliffs. We had been here before, on another school holiday trip. We liked it before, and that was enough reason to detour this way, this time. 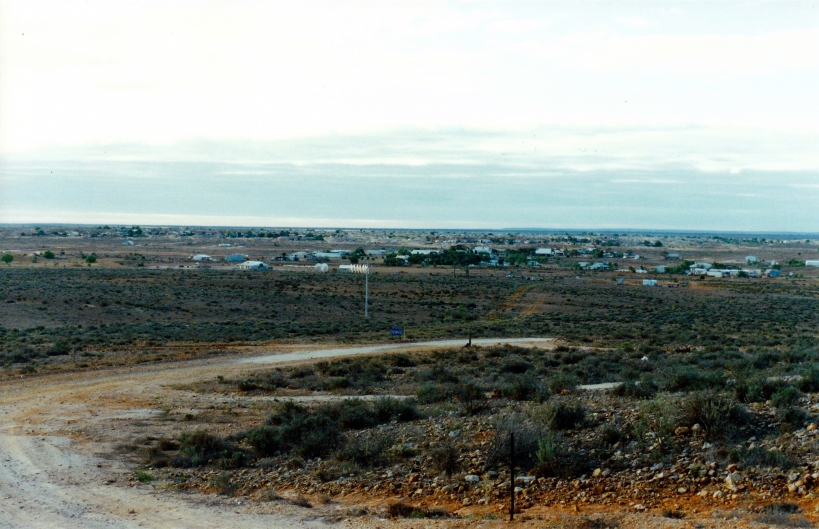 White Cliffs from one of the opal mining ridges

Opal was discovered here in the 1880’s and it became the world’s first commercial opal field. The opal was found in seams and veins that made mining it relatively straightforward. The opal from here features colour flashes in a milky pale background – so it is “white” opal, compared to the “black” opal of Lightning Ridge, to the north east.

The mining here peaked in the early 1900’s, and so too did the size of the township. Although the population has shrunk, it is still a viable small township, and opal mining still continues. It is a spread out place, where mining has occurred on several low hills that surround the centre. The name was due to the white chalky hillsides of the opal bearing areas.

Because of the extremes of temperature here, many people live in dugouts in the hillsides, which maintain an even, pleasant temperature.

When we were here last, we got to know a German lady, Barbara Gasch,  who ran a gallery here. She was a master gold and silver smith and did beautiful work featuring opal she and her partner had found. The dugout gallery was adjacent to their dugout home, which she’d showed us round. We’d loved the skylight set into the dugout “roof”, where they could lie in bed and look up at the stars at night.

This time, her gallery was not open and it looked rather as if they may have moved on. I was disappointed, as I’d looked forward to catching up with them again.

We drove out and around some of the diggings areas. Had a bit of a noodle on some mullock heaps, where it did not look as though there was anyone around, or freshly mining, to care about what we were doing. However, we were aware that we may have been on someone’s current claim, so did not stay long at that.

In one of the opal mining areas of White Cliffs

We drove a little way east out the gravel Mandalay road, where, last trip, we used to ride the bikes out. It was much easier in Truck!

It was another cold night.

Dusk over the mining ridge at White Cliffs