We slept alright. There must have been truck traffic passing on the highway, and coming into the roadhouse, but we were so tired that we didn’t hear a thing.

After breakfast, John jacked up the van, yet again, removed the wheel, and put the clip back in place. He was very careful to tighten everything up! It all ran well, all day – hallelujah! 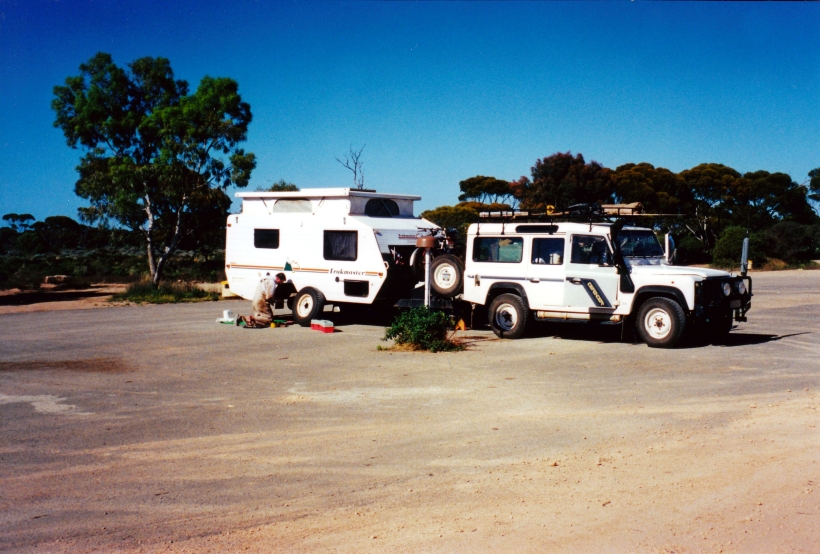 He also topped up the fuel from the jerry can. Given the price of diesel across the Nullarbor, it made sense to use this.

There was just enough of interest along the road to stop boredom setting in.

The area around the Madura Pass and Hampton Tableland was scenic. This was where the road descends from the flat Nullarbor plain to a lower coastal plain. Further on, at Eucla, the road goes up again onto the Nullarbor plain.

We stopped briefly at the lookout at the Madura Pass. 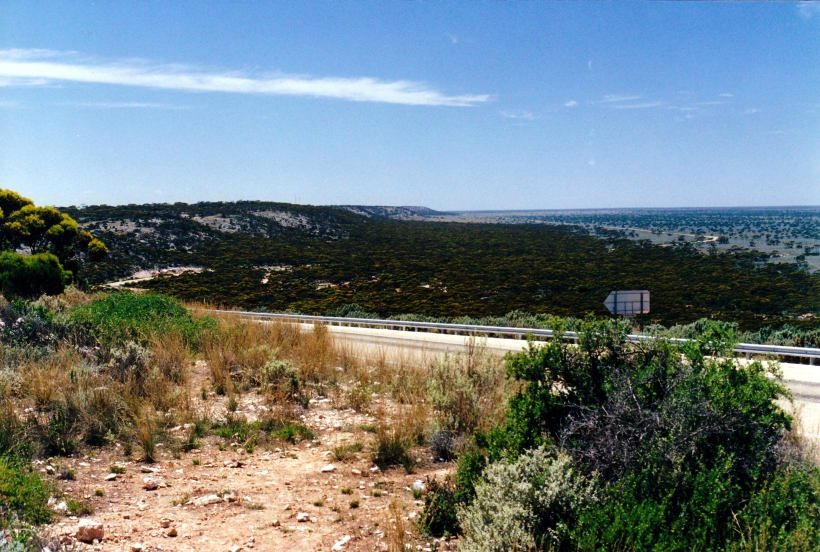 At the base of the Pass, the vegetation changed abruptly from the low mallee trees and scrub of the past couple of days, to more arid tussocky grass and very low scrubby stuff.

Refuelled at the roadhouse at Mundrabilla – $1.27cpl!

Eventually, we could see the sand dunes of the Eucla area in the distance.

Eucla dunes in the distance

When we climbed up to the plain again, we were back into the mallee trees and scrub again.

At Eucla, where there was a motel, caravan park and a small settlement, we made a bit of an attempt to find the track to the Old Telegraph Station, to the south. This was a repeater station on the telegraph line from east to west, from the 1870’s, to the 1920’s when a new one was built further to the north.

By then, rabbit plagues had eaten out the vegetation and caused the bare coastal sand dunes to start moving inland. The old Telegraph Station ruin was being slowly swallowed by sand, so I wanted to see it, whilst we still could.

The sign indicating the way to it pointed into the hotel-motel, but from that point we could not see an obvious way. With the van on, it is not so easy to take wrong tracks and turn around, so we gave up quickly, and kept on our way east.

When we got to the Border Roadhouse – on the WA/SA border, obviously – we decided to stop there, thus having a shorter day, rather than do another three to four hours of driving to the next roadhouse. With the heat, we did not fancy camping where there was no power source to run the air-con.

We also “lost” three  hours of time when we crossed the border! Whilst it is easy to adjust the clocks and watches, the internal body clock can take longer to adjust.

We paid $15 for the night’s site. This was a much more pleasant place, with some trees around the camp area.

We had lunch upon arrival, then John had a sleep. I worked on my Xmas letter.

Later, we went for a short walk in the nearby bush, looking for birds.

I am working to use up my vegetable matter before we reach the quarantine point near Ceduna, the day after tomorrow.