There was quite an exodus this morning, especially of what had become our little group – D and R and the three Argyle Mine workers.

It was hot again, and too windy in the morning for fishing trips.

Les went to town, leaving John and aboriginal R to mind the place! 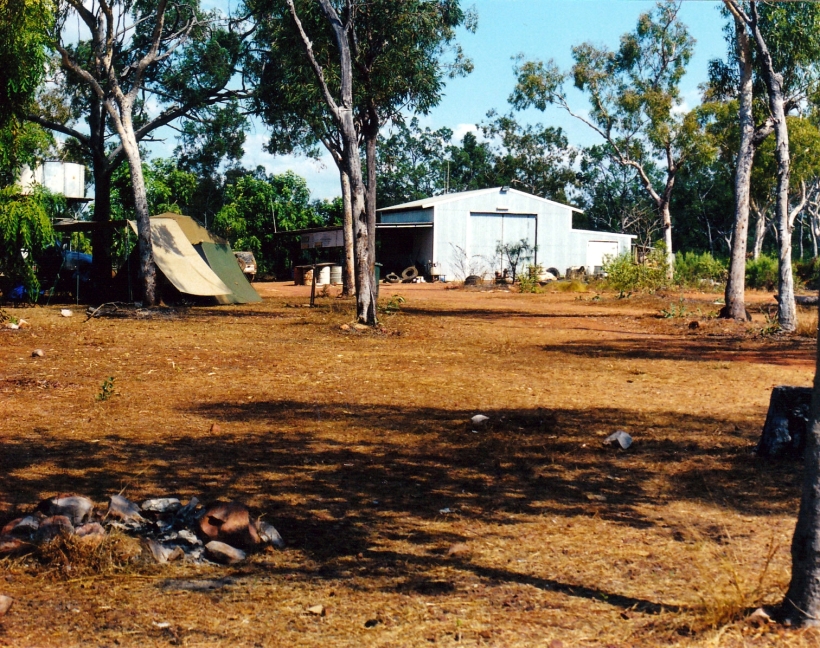 The combined house, office and workshop

John had wanted to have a quiet day, pottering about and doing some packing up, because we had decided last night, that it was time for us to leave also. Seductive though some aspects of the lifestyle here are, we do have other places to see.

I washed some clothes.

John went to make some more signs that he’d promised Les. He was not really in the mood for doing them, so it was an effort.

Some of the camp area, looking towards the Bay

At midday, R came to find John – there was no water! They went off to the bore, checked the pipes – couldn’t find a leak. They tried to keep the system pumping, but probably should have turned the water off to camp and let the tank build up a bit. There was a trickle of water some of the time, but not enough for showers.

I made roti bread for lunch, with enough over for another day or two. Did some preliminary packing up.

After lunch, we went for a drive out along the bore track, to try to tape record the noises of the red tailed black cockatoos. We’d already taped the raucous calls of the blue winged kookaburras, which had been particularly active for the past few days.

Late in the afternoon, we went for a farewell walk along the beach. R had earlier said that a person out fishing had reported a very large crocodile cruising around the point and into the bay.

The beach at Honeymoon Beach

This evening, there were only four other lots in here camping, so the place felt pretty quiet.

Les got back after dark and turned all the water off. He’d apparently found a leak, back up towards the tank, then got up during the night to pump water. He had told us, at some stage earlier in our stay, that frogs get into the works up at the bore and prevent the solar panel tracking the sun, which then means that there is no power for pumping. Hence his need for a large genset.

So, it was a mixed last day here for us.

John radphoned his sister H – it was coming up towards her birthday.

It was not good to go to bed feeling grotty, with no shower. I’d wanted to wash my hair too.

I was definitely feeling this night, that it was time to leave here. I’d had enough of aboriginal ad-hoc-ery, and red neck white men.

Les had previously, quite seriously, said that “teacher John” as he calls him, should stay and work here. Presumably just for the pleasure of being here! It would be alright if I went off travelling, but John should stay! I think part of John was flattered, but he has had enough, too. It has been a real insight into some of the issues in such places. We really admired Les, for trying to get this enterprise going, and for his hard work. It was sad that so few of his family, apart from his wife, helped at all. We could only hope – as Les does – that some in the coming generations will show more interest, and willingness to put in consistent effort.