We slept in – the mornings are so dim, here.

Whilst packing up, I could hear the conversation between our Golf caravan neighbour, who was quite nice, and the man behind him, who arrived a couple of days ago and backed a huge van right up against the Golf. There was not room to walk between the two! Even then, the van was too long for the site and his drawbar sticks out onto the road. Touring in something that big is so limiting. I bet he had some tense times on some of the local, narrow roads!

Anyway, he sounded an absolute bore, so I was pleased he had not come near us. He thought Queenstown and the west coast was “boring” – he’d done absolutely all there was to do, in a couple of days! “Once you’ve seen one mountain, you’ve seen them all”. He felt offended because he thought Queenstown houses were shabby and more effort should have been made to pretty up the place for tourists. (We thought many residents had done a surprisingly good job with their homes, in adverse conditions).

He was one of the “I know it all – I’ve got the best” types that one sometimes encounters. After the Golfers escaped, having listened to him politely, for far too long, he tackled John, who decided to prove he hadn’t seen it all…..he’d never even heard of the Mt McCall drive, or Pillinger, etc. However, he certainly had the heavier van – 2.5tonnes unloaded. Crazy! We wondered what he had in all that space – and how much more it weighed. He also had a big roof rack on his vehicle, fully laden, plus cycles on the back of the vehicle. One wonders why some people bother leaving home.

We had some difficulty hitching up the van, this time. John wanted it swung a bit sideways, beforehand, to make his approach easier, but doing that put a wheel partly off the wood levelling block, so John chocked the jockey wheel. Then it was almost impossible for me to move the van sideways at all, for lining up, so John had to back Truck exactly in line – no margin for error. It took him three attempts to get Truck straight in line with the hitch block. Not one of our better exits!

We did a careful drive to Zeehan on the hilly, winding Zeehan Highway. At least we knew what most of it was like, having travelled it the other day on the way back from Rosebery. At least, it wasn’t far.

The town of Zeehan was on a flat, buttongrass plains approach, not in a valley, as I’d envisaged. But there are some very big hills around it. On first impressions, it seemed more pleasant than Rosebery had, the other day.

Booked into the Treasure Island Caravan Park – $14 a night. The park was pleasantly “bushy”, after the gravel of Queenstown. The amenities were basic, but ok.

We set up, and had lunch.

Zeehan began as a mining centre, in the last part of the 1800’s. Lead and zinc were extracted, then later tin mining became significant. At the height of the silver boom, around 1900, Zeehan’s size was on a par with Hobart and Launceston, but the mining began declining from the early 1900’s, and the town declined too. Now it is just a small isolated town, with some once-lavish old buildings to hint at its past.

Drove to the old smelter site and explored around a very impressive set of ruins. It must have been huge in its silver mining heyday.

Then we found our way up King Hill – the views were mostly obscured by scrub, but there were massive ranges in the distance. We wandered about the mine remains there – a big poppet head, relay poles for a  haulage way up the hill, part of a turntable.

Next was a “little adventure” that John wanted to do. We drove the Spray Track, to the Spray tunnel. This 100 metre long burrow through a hill was originally built in 1901, to bring ore by light rail from the Spray Silver Mine, at its far end, to Zeehan. The tunnel is an unusual keyhole shape – this allowed for the shape of boilers being taken to the mine.

The tunnel is 3 metres high and 2.2 metres wide!

John was determined to do the one-way drive through the tunnel. Once started, drivers are committed to keep going! He tucked the side mirrors in against the Truck body! 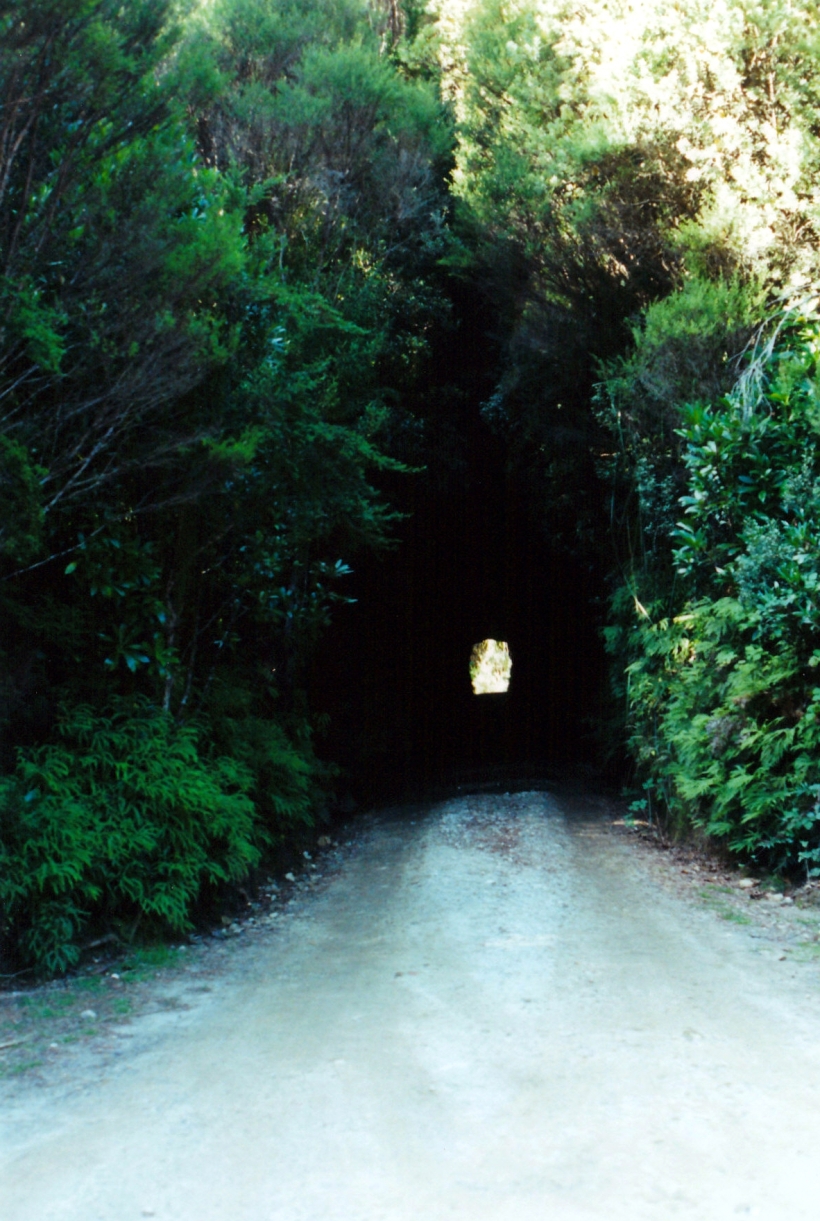 Looking into the Spray Tunnel

At the entrance, we could see the other end, so it was not as claustrophobic as I’d feared – but there was not much clearance either side. John did it well. Would have been interesting if we’d broken down and needed to get out of the vehicle!

Not much clearance room

Looked at the mine remains at the other end, then completed the loop drive back through the bush and to town. It was a very pleasant little excursion.

The caravan park had filled up a bit by the time we got back – there were about six other vans.

I went off for an early shower, thinking to get in before the rush, but still had to wait. Others had the same idea!

Tea was pork and honey sausages I’d bought in Queenstown – very ordinary – and leftover macaroni cheese. I also made borscht soup to use up the beetroot I’ve been carrying around for weeks.

S phoned in the evening, while we were watching TV. While John was talking to her, there were a couple of rifle shots, not too far away. Then, a little while later, there were three shots from much closer – far TOO close! We were both afraid to go out of the van. John phoned the police, as apparently did some others. They came about 20 minutes later and sussed it out. Apparently a local was shooting wallabies. Rather thoughtless of him to come so close. Maybe he doesn’t like tourists?

It was a really cold night.