I am starting to get a sense of time running out, to do all the things I want to do, here. Where do the days go?

John booked Truck in to the local Landrover dealer, for a service, next Tuesday, and he wants us to get up some more kms before then.

We went to get fuel at the BP Gap servo, which gives a 4cent discount per litre, to 4WD Radio Network members, like us. Made it 81cpl. Also got the gas bottles filled. John found that the brown one leaks, and we need to get a new O ring. We might investigate buying a new bottle. Not a good idea to mess with O rings!

After those chores, drove out to Rainbow Valley. The drive south, along the Stuart Highway, for 77kms, was more interesting than I had remembered it to be. There were usually low hills or dunes in the distance, and low rises in the highway that at their crests, gave a view ahead for a surprisingly long way.

Then, the 22km track into Rainbow Valley was in pretty good condition, though corrugated and rough in places. It, too, was an interesting section of track. We stopped along it, a couple of times, because of birds. Saw a female crested bellbird, and a superb brown falcon which was sitting in a dead tree. There were some lovely stands of young desert oaks (a type of casuarina)  along the track. I love these trees in this environment, and the way any breeze sounds, blowing through their narrow leaves.

At the parking and picnic area, we were tantalized by a little, flitty bird, that we couldn’t quite identify because the damned thing wouldn’t keep still for long enough. Frustrating!

Rainbow Valley was well worth the visit, even in the middle of the day, without the special lighting effects of sunrise and sunset, which is when one usually sees it featured. The camp area would be alright for a night’s stay – we could even get the van in here.

The contrasting red and white of the ramparts has been caused by water action. It is actually all sandstone rock, but in past times water that had soaked down and dissolved iron in the sandstone, was drawn back to the top in drier geological periods. As the moisture was evaporated the red, residual iron formed a hard red capping rock that is now the top part. The softer white sandstone below erodes more quickly – by rain and wind – thus making interesting formations.

Had our lunch at the picnic area, taking in the views.

Then we walked up into the valley behind the ramparts – sometimes walking in sand. There were HUGE camel footprints in there. In some of the sheltered parts, there was a really rank smell – we wondered if wild camels sheltered there. Have to admit that I looked about a bit nervously – did not want to meet any of those! 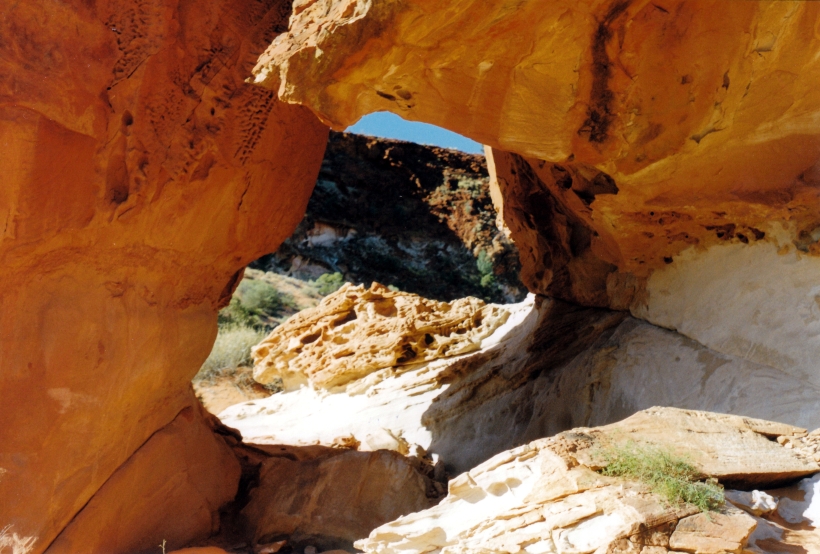 The cave beneath this rock overhang was particularly smelly

Rainbow Valley would be truly spectacular to see when there was water in the clay pan in front of the ramparts. Also when there was a full moon over the place.

I would like to return here sometime, for the night, and watch the sun set on the ramparts.

There were very few people here. Again – the effect of anything labelled 4WD on tourists. Totally different to the crowds out in the West MacDonnells. There was only one camper there, when we left at 3.30pm.

Back in Alice Springs, we checked out gas bottles at KMart – theirs were not suitable for us. But whilst there, John bought a rolling pin (for his breads) and a new plastic water container. I bought a new filter for the water jug. I went to the chemist and bought a fresh supply of Cartia aspirin for John.

Tea was macaroni cheese with tuna. John had been going to make pasties, but it was too late. A task for tomorrow.

I phoned K to ask him to send mail, Express, tomorrow.