Today was a superb day – clear blue sky, and warm.

I walked to the shops while John made breakfast. Bought a paper and posted S’s birthday card and cheque. It is a bit early but we may not have postal facilities again, for a while.

Left the caravan park at 9.15. Stopped to buy diesel – 74cpl – and while that was happening I raced off and bought some more grapefruit. We have taken to eating a half one of these each, for breakfast.

Today’s was another interesting drive, with the Flinders Ranges and, eventually, the rim of Wilpena Pound coming into view in the distance.

From Burra, we travelled north to Terowie, then cut through to Peterborough – a fair sized little town that looked worth exploring at some time. Then it was on to Orroroo, and Carrieton. To this point the country had been slightly undulating grazing and wheat land. After Carrieton there were more low hills, then, from Cradock there was a definite range ahead.

We had encountered gravel road each side of Cradock, but it was good quality.

The approach to Hawker was rather scenic. We stopped here to eat lunch, at a pleasant picnic area and well done Information Centre.  Then took the Wilpena turnoff. The main road continues on towards Leigh Creek and parts north, and we shall pick that up again later.

North of this little town, the ranges ahead became more defined, and around the turnoff to Rawnsley Park Station, we could see the ramparts of the Wilpena Pound, to the left, ahead.

We started to see some stands of cypress pine. I associate these, so much, with Wilpena – on a previous school holiday trip here, in 1992, cypress pine firewood was available, and the whole campground smelled aromatic from it. There were the occasional big old red gums too.

Initially, after Hawker, we’d been heading north through a wide flat valley between low ranges. This gradually narrowed and the ranges got higher. We turned west onto the Wilpena road and the jagged Pound rim was not far ahead.

Reached Wilpena mid afternoon. It has changed greatly in the seven years since our last visit. There is a new Visitor Centre, and shops, and a new powered caravan section in the camp ground. There are also new amenity blocks. It now seems very slanted towards eco tourism and being environmentally sensitive. They now run a shuttle bus to the Pound entrance – no more driving one self – and charge $3 each to ride it!

We took a powered caravan site at $17 a night. But the seventh night is free. Also bought a four-week National Park Pass for $15. Found I can buy a Desert Parks Pass here too, which we will need later in the year.

Our site is firm gravel, big, and well separated from neighbouring sites by treed areas and walkways. Despite it being the designated caravan section, it has more the feel of a bush camp. It has a water tap, too, and a ring of stones making a fireplace. There is no TV, though. Wonderful! The stay here is going to be so good! It is great to be back here again, with time to thoroughly explore, this visit. I am “owed” lots of bush walks, after John’s bowls indulgences – and there are lots of walks to choose from, in these parts! 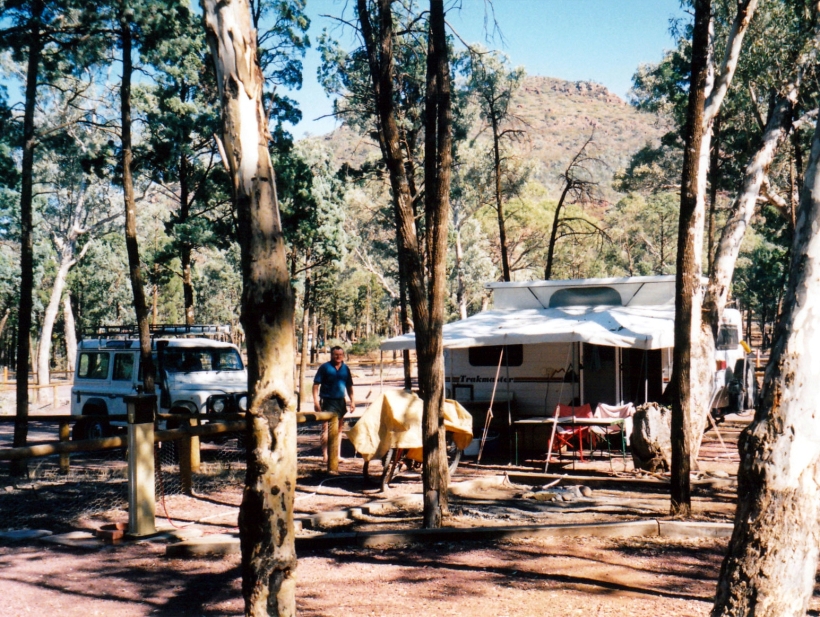 Wilpena camp – amongst cypress pines and with a mountain backdrop

After we’d set up for an extended stay, watched by a rather noisy Red Wattlebird, we walked around the “village” and visited the shop, to see what it offered. Basic groceries, tourist items, take away type food and the like. There is a distinct “bush” smell about the place.

We discovered whilst setting up, that there are plenty of mosquitoes here!

Tea was soup, rissoles and vegies.

The night got very cold. With no TV, it was a matter of reading, then getting a fairly early night.